This Is How You Brave the Winter Chill and Bike 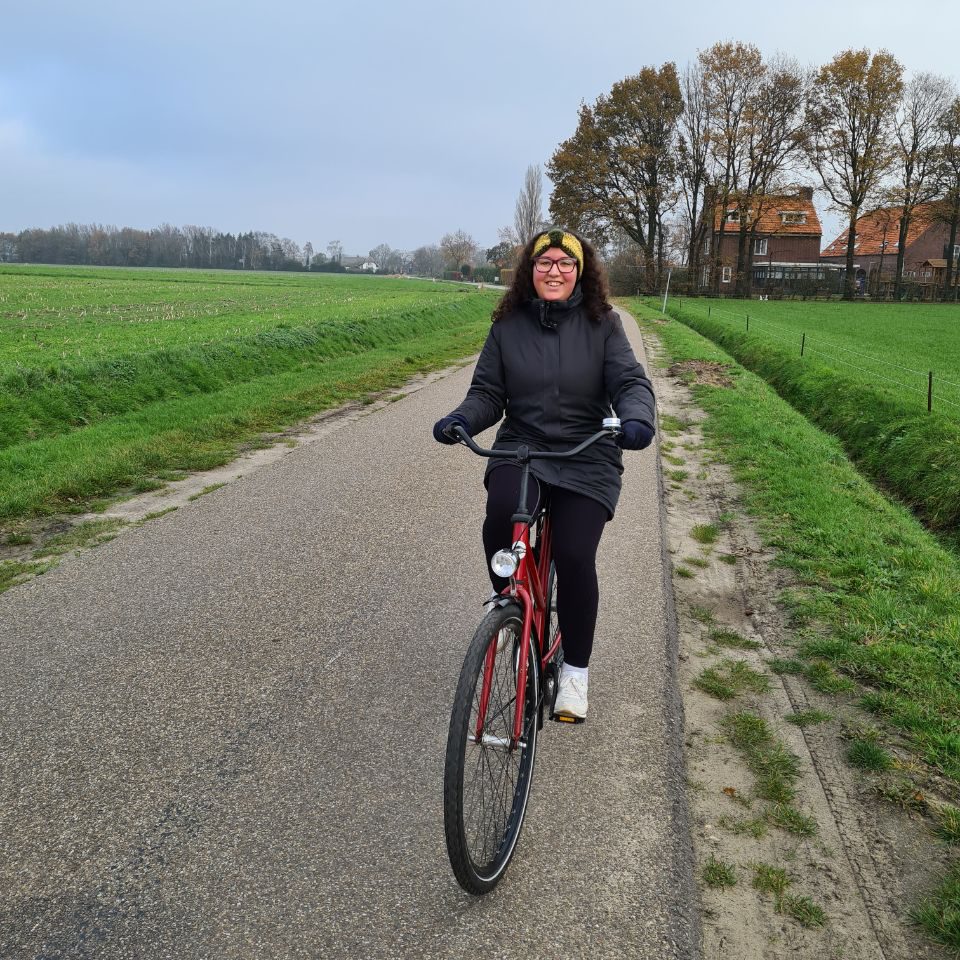 Biking in the cold is no easy feat, especially if you have no other choice. You may freeze your patootie off, but if you’re a Dutchie or a transplant to the Netherlands, you’re still going to bike to wherever you need to go like work. I cycle everywhere. I don’t have a Dutch driver’s license yet, so my bike takes me everywhere. The Netherlands doesn’t accept my American driver’s license since I’m on a partner visa. After 6 months of living here, I need to take the theory and practical exams over again in order for me to be able to drive here. I also never learned how to drive a manual car. My boyfriend’s car is a stick shift. Sometimes my boyfriend drives, but my bike is still my main mode of transport.

If you think about it, not having a car I can actually drive has turned into a blessing. I am much more active because I have no other choice. If I had the choice to drive, believe me, I would. The choice between a warm cozy car and freezing in the cold, the choice is clear. I could take the bus, but waiting for the bus, riding a few stops, and then walking to my destination would take so much more time than just biking to where I need to go. And biking is basically free. All I had to pay for was the bike. I bought my bike second hand for about €200 ($243). Holy guacamole, the last time I wrote about the cost of my bike was in April. €200 was about $213. Inflation is real. Biking can save you a boatload of money because you don’t have to pay for insurance, gas, or expensive maintenance.

Back to cycling, for people like me who bike everywhere, winter can be especially hard. It’s nowhere near as cold here as it is in Wisconsin, but any cold is freezing when biking. Let me tell you, I never ever biked in the US when it wasn’t warm outside. I just wouldn’t do it. Biking in the cold, like what is that?

Your Bike Is Your Lifeline

The bike is the main mode of transport in the Netherlands. There are more bikes than people here. That is because many people have multiple bikes like a road bike, mountain bike, and racing bike. Also, people keep a bike at both their home train station and their destination train station when taking the train to work, for example. That way they always have a way to get around when getting off the train.

Biking is great for your overall health. It keeps you active without even really trying. I have a hard time staying active, so going everywhere by bike makes me be active. I don’t even have to talk myself into it. Biking is also great for the environment.

So how do people bike in the cold? First, you learn to have thick skin. What’s a little cold or a lotta rain? My boyfriend always tells me “Soreh, you’re not going to melt.” I still refuse to cycle when it’s raining. I mastered the cold, the rain I will never get used to. Or maybe I will, who knows. You just have got to get over yourself and tell yourself that the cold isn’t going to kill you.

The second step is to layer, layer, layer. The other day, I had my feet up on my boyfriend’s lap. He was looking at them, curious why there was black in between where my socks ended and my pants began. He figured out that I was wearing tights under my pants and socks. As a typical Dutch person, he thought it was nonsense. But that is how I don’t freeze. I didn’t grow up biking in the cold.

Before I get on my bike in the winter, I always put on several layers. My coat is from Canada, so thankfully it’s made for the frigid winters. I bought it when on vacation there at the beginning of this year. I didn’t expect to be so damn cold. Tights, pants, socks, shirt, sweater, scarf, coat, hat or earmuffs, and gloves. The key is to have no skin exposed. Also, make sure that you can take off some layers if you get hot or sweaty.

The third and final step is to get on your bike and cycle. You’re not going to die. If you think you’re cold, think about all those Dutch people that barely wear any warm garments while biking in the winter. It’s baffling. If they can do it, so can you. My boyfriend doesn’t wear a hat or gloves but always complains that his hands are freezing. It’s not like we don’t have multiple pairs of gloves. Do the Dutch enjoy being cold?

The good thing about biking in the cold is when you get home or to your destination, you can drink a steaming hot beverage, take pride that you braved the chilling temperature, and were active. Isn’t that cozy?

Do you brave the cold and bike?